Did you know that the body is made up of 102 minerals, 92 of which are also found in sea moss? Needless to say that Irish Sea Moss is a good source of vitamins and organified minerals. Organified basically means that they occur naturally in a plant based form that is easily able to be assimilated into the body. There is no scientific manufacturing required. In the world of whole foods like this, you get the full benefits of sea moss nutrition that is readily available in the sea moss, all naturally.

Here is a short list of the various elements, chemicals, trace minerals, and vitamins typically found in sea moss: 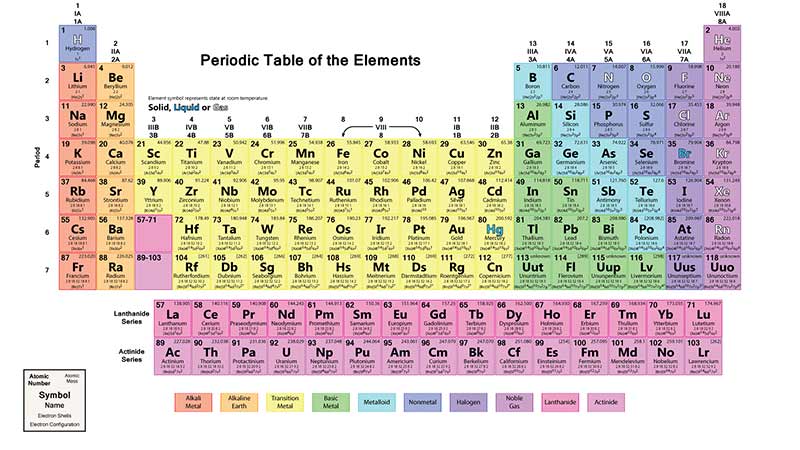 Periodic Table (with Names) of the Elements

Let’s take a closer look at a couple of these that are not frequently looked at.

Selenium is used widely in a range of applications and is found in commercially produced baby formula, multivitamins and a range of other supplements. It is necessary in small amounts for healthy cellular function. Being a component of specific antioxidant enzymes, it also helps to maintain healthy thyroid function by converting one type of thyroid hormone to another type as needed. Selenium is capable of changing form under various conditions including temperature variations and exposure to Carbon disulfide.

Organic Selenium is believed to provide support to the body and prevent a range of complications including:

Laminarin is a beta-glucan that is found in brown species of seaweeds and algae. It is responsible for the storage of the polysaccharide Glucan. It plays a key role in medicinal and medical research circles as it has been found to possess the following properties:

Laminarin is created via photosynthesis and is needed as a part of the life cycle of many microorganisms. From a food source perspective in our global ecosystem, think of Laminarin as a carbohydrate. It is used as a food source in a similar way to how chrysolaminarin is put to use by phytoplankton, in particular diatoms.

Fun Fact: Did you know that diatoms are responsible for the generation of about 20% of the oxygen we have access to on Earth? They are found in the rivers, streams, oceans and soil of our planet and number in their trillions! This is another great reason for choosing sea moss that is responsibly farmed instead of wildcrafted. 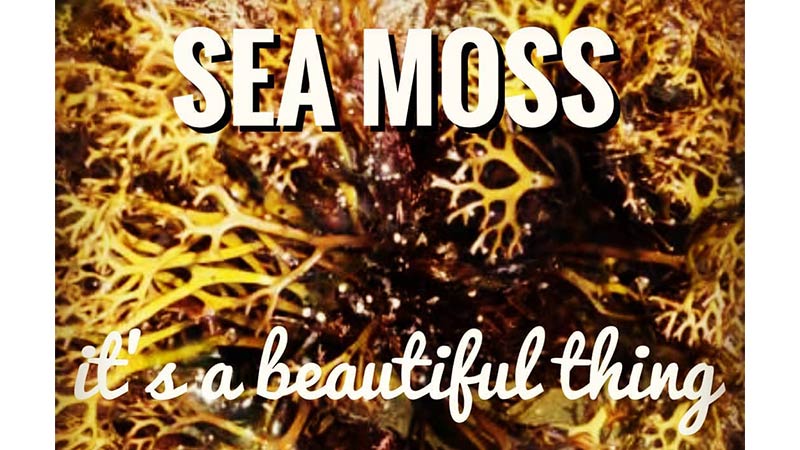 You know that Sea Moss is a beautiful thing! Find this image on Instagram.

What is Sea Moss?

Irish Sea Moss is the seaweed that was used a lot during the Irish Potato Famine. Sea moss has been referred to by several different names and is often can include Carrageen or Chondrus Crispus. Chondrus Crispus grows on what are typically rocky coastlines in cooler waters like those in the Northern Hemisphere around the areas of the Northern Atlantic.

You’ll know it when you see it, it is a red algae with a typically flatter appearance than other types of seaweed found around it. As you can see below, the thallus that can look like flat leaves. 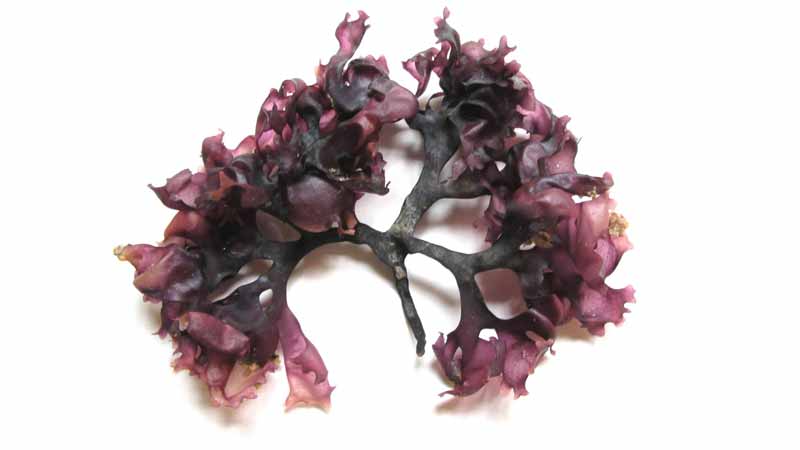 However, when I did my research I found that several people of influence, what some may call public notaries, are promoting the use of different species of seaweeds to Chondrus Crispus and referring to them Irish Sea Moss. This can lead to a little confusion, and some heated debate.

These other species have been found to include Eucheuma Cottonii, Gracilaria, and Kappaphycus Alvarezii. These are seaweed species which have proven to be much easier to source and grow in many oceans around the world. They are also more suited to the warmer climates of areas like the Caribbean and the Pacific Islands, unlike Chondrus Crispus.

Comparing Chondrus Crispus to Eucheuma Cottonii, Gracilaria and Kappaphycus Alvarezii, these tend to have a tubular looking thallus. They also come in several colors like green, brown, red, purple, gold and sometimes a combination of them as well. When these species of seaweed are fresh, they tend to have a firm and crisp outer texture with the inside being softer and more jelly-like. Some of them may also seems a bit rubbery.

What you tend to find for sale are variations on the dried version of these types of seaweed. They can be prepared in such a way that they hold their natural color, or they can be bleached to appear much lighter. This is not normally a chemical bleaching that occurs. It is normally sun bleaching, although, some large scale manufactures out of China who process seaweed have been known to use chemical bleaching. So it pays to know more about your sea moss in the end. 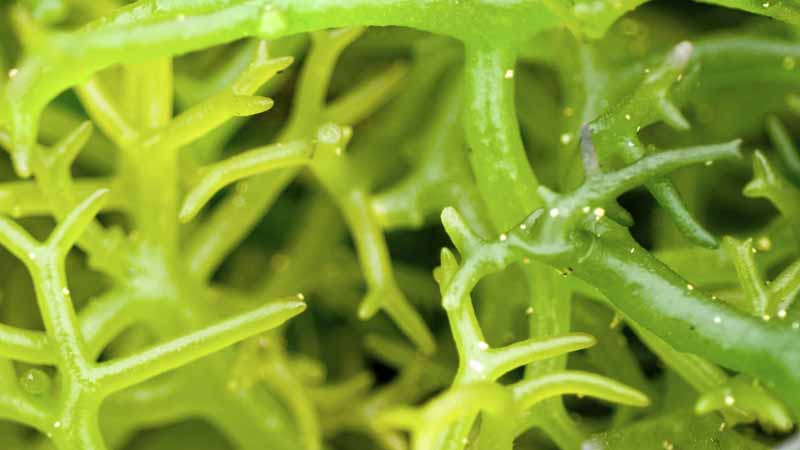 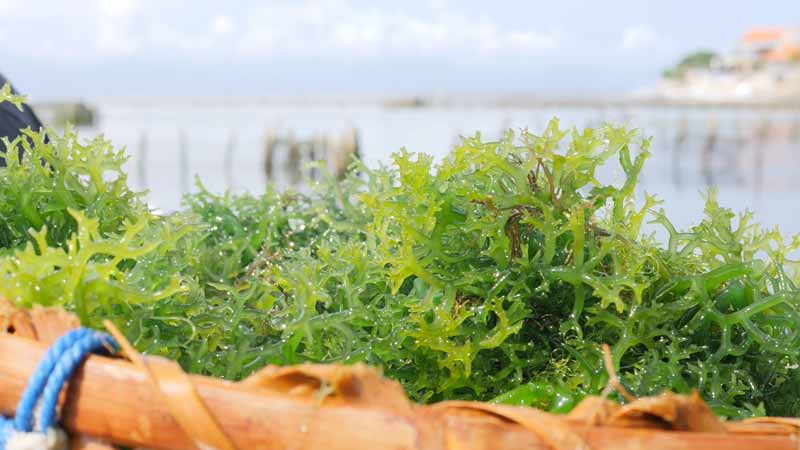 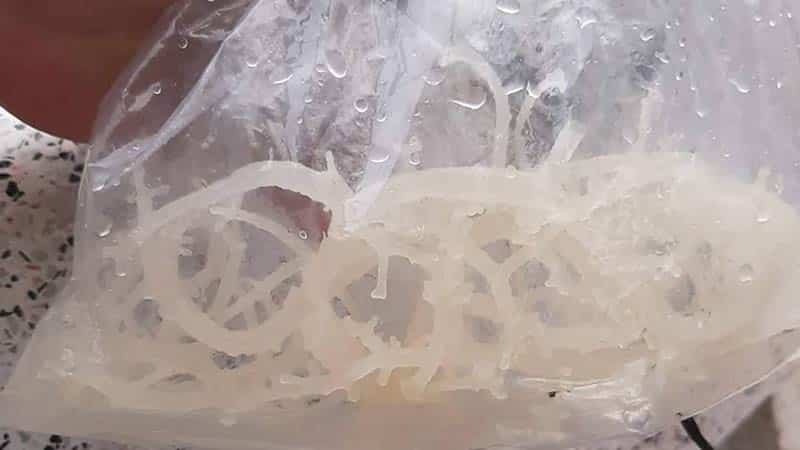 Sea Moss inside a clear plastic bag that has been exposed to the sun to help sweat the color out of the seaweed. Find this image on Instagram.

After doing extensive research I’ve learned that these other species, referred to as sea moss (and Irish Sea Moss) by many people in the Sebi community, are also very nutritious. These are the species of sea moss more commonly found for sale online because they are more affordable and easier to acquire.

Chondrus Crispus in comparison can seem very expensive when you look at it on a price per kilogram (or price per pound) basis. So, the question I find I ask myself is ‘what price do you put on your health and the quality of the food you eat?’ This is why we are looking at sea moss nutrition.

Speaking from a more general basis to include all the species we have introduced you to here, sea moss comes in various shapes, colors, and sizes. The size is typically indicative of the time of the moisture content after the drying process has been completed.

A Word of Caution on Manufacturing

You may already know of Irish Sea Moss by a different name. Carrageenan is a bi-product of Irish Moss and has been used in many processed food and beverage products for a long time now. Carrageenan is used as a preservative, thickener, emulsifier, and stabiliser.

There are food processing companies and manufacturers who add Carrageenan to meat products, deserts, salad dressing, beverages, a variety of milk products, nut drinks (Vegan substitutes for milk), yogurt, baby formula, toothpaste, shampoo and conditioner. So, seaweed has made it into your food already in so many ways that you’re most likely not even aware of!

There is only one major flaw that comes when to the manufacture of Carrageenan and considering the value of sea moss nutrition after the fact. It loses all of the nutritional benefits that the seaweed originally had. So don’t assume that you’re going to be getting specific health benefits when you consume processed foods containing Carrageenan. This is not likely at all.

With (the yet to be 100% confirmed) 92 minerals, Irish Sea Moss is one of the most complex and nutritious foods available. There are so many minerals which are beneficial to the body. The minerals have been known to help with Joints and Bone strength, Hair and Skin, muscles and organs. It’s an all round winner in the Superfood category.

There are people like Dr. Sebi who have survived on a Sea Moss and water fast for a very long time. The seaweed provides all the minerals and nutrients that the body needs to stay vibrant and energized. It is also a drawing agent, which basically means that it helps flush out toxins. We already know that the Irish consumed Irish Moss as part of a staple diet during the potato famine.

Sea Moss helps create the circle of life. From enhancing the libido to improving fertility and beyond. During pregnancy, women tend to become nutrient deficient and sometime experience health difficulties. But, when consuming Sea Moss during pregnancy there are many health benefits. It helps with the fetus’ development and keeping the mother health and strong. After the baby has been born, the Sea Moss continues to provide nutrients from the amniotic fluid during breastfeeding. Age is just a number but Sea Moss can support everybody, young and old.

How Is Sea Moss Used?

People in different parts of the world prepare sea moss in different ways. In Vietnam, they rehyderated dried sea moss and mix it into a range of foods as a vegetable. More commonly, seaweed makes an appearance in salads, cakes, jellies and deserts. 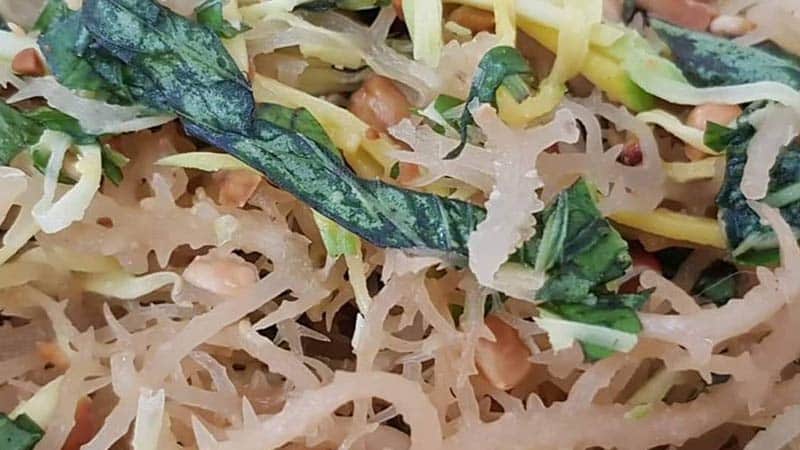 The best Sea Moss salad I’ve ever had! Find this image on Instagram.

In Jamaica, they are well known for making a sea moss drink. I’ve heard that the Jamaicans prefer to go about re-hydrating their seaweed by boiling it until it becomes soft and it takes on an almost gelatinous consistency. In Jamaica, people typically cook the seaweed with coconut milk, a few spices like nutmeg and cinnamon and then sweeten it to taste.

Personally, I turn the sea moss into a gel after allowing it to soak in water for about 48 hours. I apply it topically to my skin, and add it to anything I want. I normally find myself including a big spoon or two of sea moss to deserts, smoothies, tea and coffee, and as a thickener in soups and gravy.

Really, the options are endless because the seaweed has little to no smell or flavor, so it doesn’t change the taste of what you are adding it to. However, it does change the texture. When I add sea moss gel to my drinks like my spicy chai tea, I notice a more creamy texture which is simply divine. I suppose this is similar to the Jamaican style Sea Moss drink.

Irish Sea Moss nutrition far exceeds that of any other plant or animal based food that I know of. There are so many fabulous superfoods available on the market, and I have yet to try all of them. But I can say this, I love the benefits that I’m experiencing using Irish Sea Moss.